Artemis Institute provides educational programs, forums and activities that help us explore and understand the relationship that exists between nature and culture. We believe that the tie between the creative process and the relationship that we have with the world is profound, and, when engaged and expressed, results in transformations of how we relate to the world in which we live.

Such cultural transformations, in mind, spirit, and body, change our perceptions of the world and ourselves, and bring us closer to a necessary realignment of living and responsibility for the future.

Started in 2001, Remote Studio is Artemis Institute's lead educational program providing university transferrable credit. Remote Studio is the only immersive educational opportunity of its kind in the country. The program provides students the opportunity to fine tune their creative process, refine their personal view of the world, and explore their sense of responsibility to the world.

The food we grow; the art we make; the care with which we raise our children. The tools we use; the communities we build; the ways we interact with the environment. All these and more produce our unique cultures, the distinctive ways we humans think and act and live with each other and the planet. The Artemis Institute is dedicated to aligning modern cultural practices with natural systems, and in so doing helping people find more sustainable, more harmonious ways of living on Earth. To accomplish its goals, Artemis develops and offers university-level courses, personal enrichment programs, and residencies that support the development of more sustainable cultural practices

Artemis Institute is a 501c3 nonprofit

Artemis Institute is located in Jackson Hole, Wyoming. Often mislabeled, Jackson Hole is not a town, but a place and a state of mind. Jackson Hole originally got it's name from the trappers who moved through this region in the 1800's. Today JH is a thriving community of outdoor adventurists, artists, environmental thinkers, and all those who love living close to the natural world.

We are based here because we believe our educational mission is best fulfilled from the experiences gained in the Yellowstone Eco-region. We are also filled with Awe every time we step outside. From this eco-region we share with others the great experiences of the larger wild landscape and the unique culture that has evolved.

Teton County, Wyoming and the surrounding communities also provide the great opportunities for the design build projects the Remote Studio students take on. So, whether you call it Jackson Hole, Jackson, Wilson, or Teton County, this is the place that Artemis Institute calls home.

Background, context, and intellectual ideas that inform the motivations and pedagogical context for Artemis Institute and its programs

From Local News to International Reviews follow Artemis Institute, its instructors and programs

The Advisory Board Members that serve Artemis Institute come from a variety of backgrounds. Each member offers a unique skill-set that helps to guide the Institute in its mission and development.

Dr. Vincent Canizaro the Director of the Department of Architecture and an Associate Professor of Architecture at the University of Texas at San Antonio. He is a registered architect in the state of Massachusetts. He has co- edited two special issues of the Journal of Architectural Education (February, 2004 and May, 2007) dedicated to the subject of Architecture and Landscape and Sustainable Architecture, respectively. He has written for Texas Architect Magazine, the AIA San Antonio guidebook to Architecture, and published, with Princeton Architectural Press, Architectural Regionalism: Collected Writings on Place, Identity, Modernity, and Tradition (2007) which documents the its intellectual history. His other research and practice interests include sustainable and community-oriented design, landscape, and site-specific design theory.

Since founding his firm, Carney Architects 16 years ago, John Carney has helped to expand the design vocabulary of the mountain west while remaining grounded in tradition and local context. His reinterpretation of vernacular architecture synthesizes modernist and classical principles within a regional aesthetic. Summers spent on his family’s ranch on the Upper Green River gave him a respect for the history of the area and its agrarian traditions, both of which inspire and permeate the work of the firm.

After building a successful practice in Denver, John relocated to Teton County, Wyoming, where the new firm took root completing a range of projects from residences to the local high school to the second phase of the JH Center for the Arts. Doing larger civic projects allowed John to form successful collaborations with other architects and consultant teams, working alternately as Architect of Record and Design Architect. On the public side, John has served as County Commissioner, Planning Commissioner, and on several boards, always championing design as a core community value. John has also lectured on design and chaired award juries throughout the region. His distinguished career in architecture and public service has given him a platform from which to promote sound design principles within the architectural profession. Carney Architects has received many regional and national awards, including AIA Wyoming Firm of the Year in 2004 and AIA Western Mountain Region Firm of the Year in 2009. John was elected to the AIA College of Fellows in 2008.

Jori Erdman is the Director of the School of Architecture at Louisiana State University and Design Editor of the Journal of Architectural Education. Erdman came to LSU from Clemson University where she was the Director of Graduate Studies and the Community Design and Research Center. Her teaching and research activities focus on design-build in architectural education and the cultural production of architecture. She has published numerous articles in these areas and has received grants and awards including an ACSA New Faculty Teaching Award, an ACSA Collaborative Practice Award and a Graham Foundation Grant. She has co-edited several theme issues for the Journal of Architectural Education including one entitled “1:1” with a focus on hands-on design teaching and learning and one titled “Architectural Design as Research, Scholarship, and Inquiry” that brought together many divergent viewpoints on the topic of design as a mode of research. Her latest endeavor, a collaborative studio bringing together ecologists, designers and engineers to work with coastal Louisiana communities, aspires to help coastal communities around the world deal with our changing environmental conditions. She received an M. Arch. degree from Columbia University in 1995 and a B.S. in Architecture from the University of Virginia in 1989.

Audrey Hall is a professional photographer based in Livingston, Montana. She is widely published with stories about architecture, American culture and cuisine appearing in numerous publications including Western Interiors and Design, The New York Times, Sunset and Mountain Living. Her images from the six-hour documentary, Frontier House, were described as “breathtaking” from 13WNET in New York and Wall to Wall Television in London.

Hall’s career in film has spanned two decades with over thirty feature, commercial and editorial projects. Her work has ranged from still photography to directing and producing for a wide variety of national and international clients. Most recently, she associate produced the independent feature, Steal Me, which was selected to premiere at the 2005 Sundance Film Festival. She is an active board member of the Montana Film Center, a mentor for the Hatch Audiovisual Arts Festival and a senior editor at Western Art and Architecture.

Hall was born in Brazil and grew up predominately in Montana. A Rotary Scholar, she has a degree in architecture from Montana State University and studied photography at the Glasgow School of Art in Scotland. She was a recipient of the Canon Emerging Professionals Scholarship and is recognized as a creative intellect of national merit.

Nash is a Remote Studio alumni, contributing to the Fall 2007 studio renovation project. Currently he plays a key role in furthering sustainability practices through his work, community leadership, and personal values. His involvement at High Plains Architects has included contributing to multiple LEED® Platinum certified projects, and is currently the LEED Project Administrator for numerous others. His role also includes work on commercial and residential design and project management, master planning, as well as various marketing projects. Nash is focused on supporting and designing high performance green buildings, as well as developing and promoting active, livable, healthy communities and neighborhoods.

Born and raised in Durango, Colorado, Nash’s affection for nature and the built environment started at an early age. He works hard to be an environmental steward by promoting a livable community, using organic and recycled products, supporting local foods and riding his bike for local transportation. Living in Montana has allowed him to continue to pursue the outdoor activities that he loves - skiing, backpacking, mountain biking, boating, hiking, and soccer. He is extremely involved in the local community as the immediate past President of BikeNet, a local bicycle and pedestrian trail advocacy non-profit. He is also a member and past Board Member of the USGBC Montana Chapter, past Vice Chair and member of the Yellowstone Valley Citizen’s Council, and former organizer of Green Drinks Billings. Nash is a licensed architect in Montana, a member of the AIA and is a LEED® Accredited Professional with a Building Design & Construction specialty.

Dr. Kath Williams, past president of the World Green Building Council, and Executive Vice President of for the International Institute for Sustainable Laboratories, has a diverse background in sustainability-from construction projects to green education.

Drawing on her experiences as assistant to the vice president of research at Montana State University, her position as executive director of MSU's Green Building project, and her service as vice chair of the U.S. Green Building Council for six years, Kath was involved in the development of green building councils and rating systems throughout the world. She is known for her work on LEED-Platinum projects in India, two Taiwan Semiconductor’s LEED-Gold fabrication plants, and the recently awarded LEED-Gold to the Air Force Weather Agency data center in Omaha.

Kath was honored to be named the first Fulbright Senior Specialist in Sustainability and to lead the team that produced the U.S. State Department’s Green Guide for Operations and Maintenance for all embassies and consulates worldwide.

Mark Williams is a Director and owner of Oliver Audio Visual a UK based company that designs and installs entertainment and control systems for clients across the globe. Prior to Olive Mark spent over 30 years in the financial services industry most notably as a partner of TT International an investment management firm. His responsibilities included being a member of the senior management group as well as geopolitics and currency management. In addition Mark worked for seven years at Goldman Sachs where he held a number of senior positions including Co-Head of Foreign Exchange in Europe. Mark received his BA from Durham University (UK) where he studied music, classics and theology; he undertook postgraduate studies at both The Guildhall School of Music & Drama and London Business School. He is married with two children. Mark is Fellow of St. Chad’s College, Durham, formerly Chairman of The Royal School of Church Music and currently a Board Member of The Orchestra of the Age of Enlightenment. Outside work he has travelled extensively, is passionately interested in the US especially the National Parks and has visited every State in the Union except 3!

For Information on Artemis Institute's Executive Board please contact us at info@artemisinstitute.org

Dr. Ryker coordinates Remote Studio, instructs, develops the new programs of Artemis Institute and lectures nationally on Remote Studio, Sustainability, Environmental Responsibility, and the core relationship between Nature and Culture. From time-to-time Dr. Ryker still teaches as a Visiting Professor at Design Schools across the country. 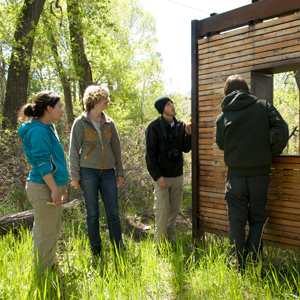 "If it's wild to your own heart, protect it. Preserve it. Love it. And fight for it, and dedicate yourself to it, whether it's a ,mountain range, your wife, your husband, or even (god forbid) your job. It doesn't matter if it's wild to anyone else: if it's what makes your heart sing, if it's what makes your days soar like a hawk in the summertime, then focus on it." - Rick Bass